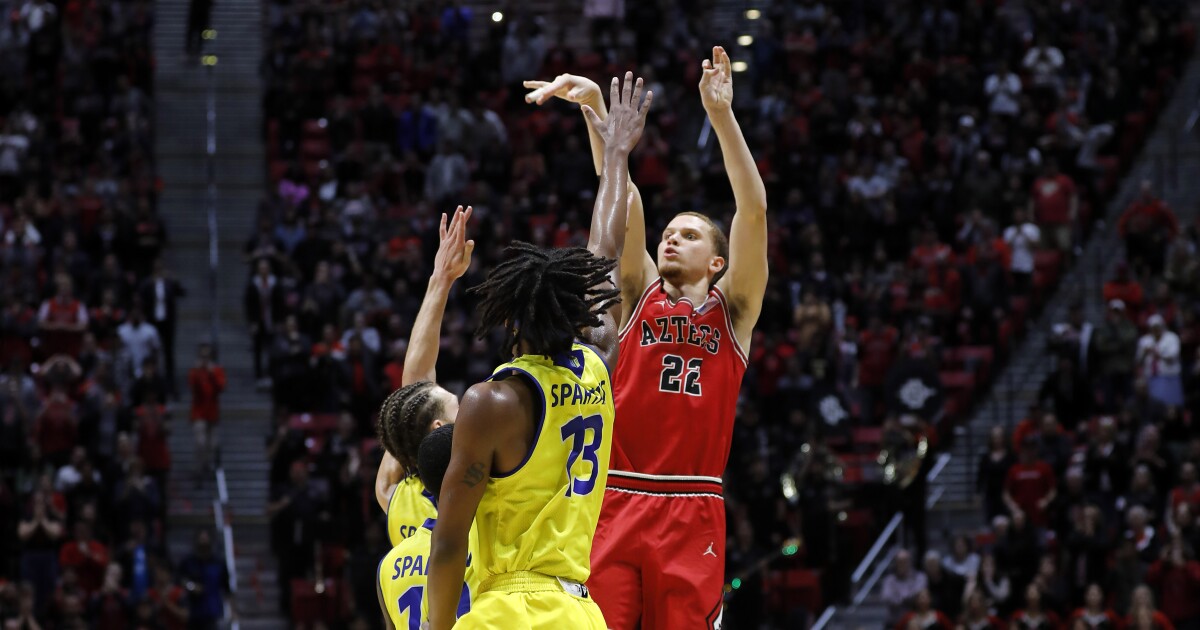 San Diego State’s Mountain West championship rings from last season feature a map of the United States with an Aztecs logo inside, representative of the final undefeated team in Division I after a 26-0 start.

It would have been a more ordinary championship ring, glittering with the usual array of gemstones, had Malachi Flynn missed a 3-pointer from Yuma over two taller defenders with .9 seconds left for a 59-57 win against San Jose State on Dec. 8 that, truth be told, the Aztecs probably didn’t deserve — the only one-possession game of the 26.

“They say one shot makes a game, one game makes a season,” coach Brian Dutcher said earlier this week. “It ended up pushing us to a 26-game winning streak. … Who knows, we lose that game and some of those memories — the map and all those things — aren’t there for us.”

The Aztecs would go on to win the regular-season Mountain West title by a record five games over second place, and 14 games ahead of the 3-15 Spartans in 10th.

But the conference’s unbalanced schedule last season didn’t include a road game at San Jose State, a chance to prove Dec. 8 was an aberration. Monday night at Viejas Arena (8 p.m., Fox Sports 1), then, is their first meeting since, and their fortunes haven’t changed much.

“Well,” Dutcher said, “I think there will certainly be a level of respect when we play them, having been pushed to the very end last year. They’ll have our utmost respect. We will not take them lightly. We will be prepared.”

Two games against New Mexico in Lubbock, Texas, were wiped out just hours before the Aztecs were scheduled to leave for the airport when the Lobos decided either they couldn’t or wouldn’t play with a depleted roster. The conference office continues to examine the veracity of their claims in the absence of COVID-19 positives, particularly as it relates to the integrity of the conference title race and whether to classify the canceled games as no contests or forfeits.

Dutcher spent a couple days pursuing a replacement game, to no avail. His calls included No. 1 Gonzaga and No. 5 Houston.

They retooled practice plans on Tuesday and Wednesday to work on situational plays that you never seem to have time for — down three in the closing seconds, up three, down two but needing to go the length of the floor. They took Thursday off, then spent three days prepping for San Jose State and its variety of zone defenses.

The Spartans, like New Mexico, haven’t played any games in their home arena because of a strict Santa Clara County public health order. Unlike the Lobos, they have forged ahead unabated even after their women’s team opted out for the remainder of the season in early January.

And did it despite an 0-9 start in conference play.

“It says a lot for not only their coaching staff and their administration but their team,” Dutcher said, “to want to have a season so badly that you’re willing to live on the road, to not be on campus, to deal with the frustration of nothing but travel, living out of a hotel room. And that’s a tremendous challenge and credit to their coaching staff and team for enduring that and continuing to fight.”

They were finally rewarded with a three-game win streak. It’s come against New Mexico (once) and Air Force (twice), who are a combined 3-22 in the conference. But when you’ve averaged 2.4 conference wins and never finished higher than eighth since joining the Mountain West in 2013-14, you appreciate the small things.

Now the Spartans get an SDSU team that hasn’t played in nine days, which may or may not be a good thing for them. The last two times the Aztecs went more than a week without a game didn’t go so well. Both were followed by a home loss: 72-62 against BYU after an eight-day break and 70-67 against Colorado State (despite leading by 26) after an 11-day break.

SDSU and SJSU meet again Wednesday night, then the Aztecs have eight days before a two-game series at Fresno State. Might Dutcher cast his line in the water looking for another bite?

With the New Mexico games officially canceled, that leaves him two under the NCAA maximum this season of 27 even if the two postponed games against UNLV are rescheduled in the make-up week before the Mountain West tournament.

“There’s always talk and thought about putting a game in, so we’ll see,” Dutcher said. “Every week, you look up and someone else is going on pause, so that frees up opponents. So we’ll start looking at who went on pause, who were they supposed to play and does it make sense to try to get a game? So yeah, we’re always actively looking for games.”

Spartans update: They come to Viejas Arena with a three-game conference win streak and the Mountain West player of the week for the first time since 2017, when the Spartans had Brandon Clarke (before he transferred to Gonzaga and became the No. 21 overall pick in the NBA Draft). The player of the week is senior F Ralph Agee, who averaged 18.5 points and 9.0 rebounds in the sweep of the Falcons. San Jose State’s media relations department notes that the Spartans are 3-1 under the Biden Administration. The Air Force games were played in Phoenix because Santa Clara County’s public health order prohibits sports teams from practicing or playing. The big revelation has been senior G Richard Washington, who leads the Mountain West in scoring (20.7 ppg) and has had three games of 30 or more (including 35 against Colorado State). The Spartans are 335th nationally in defensive efficiency by the Kenpom metric. They’re last in the MW in scoring defense (80.8 points) and second to last in rebound margin (-8.1 per game).

Aztecs update: They have climbed to 22nd in the NCAA’s NET metric, best in the Mountain West after Boise State slipped following Friday’s loss at Nevada. The Broncos are 32 (before Sunday’s game), Colorado State 45 and Utah State 49. The Aztecs are up to 23rd in Kenpom, equaling their season best. Aguek Arop has been practicing again after missing the last two games with vertigo, but Keith Dinwiddie Jr. (hip) is doubtful. Here’s what a soft schedule will do for you: Since Jan. 22, the Aztecs rank first in Div. I in scoring (93.5 points), first in scoring margin (plus-31.5), second in rebound margin (plus-18.0) and fourth in shooting accuracy (55.5 percent). The Aztecs have scored 87 or more in four straight games for the first time since 1971. They are only a game out of first place in the loss column after Boise State’s loss Friday. All three Aztecs players who scored in double figures in last season’s game against San Jose State are still on the roster: Matt Mitchell (13), Nathan Mensah (12) and Jordan Schakel (11). Mensah also had 12 rebounds and four blocks.

GameDay
Welcome to GameDay.Blog Powered by SportsBook-Live.com. Please register to our site, As more States become Available for Online Gambling, We will automatically upgrade your status from Subscriber to Player. Please note we are not affilliated in any way with ESPN, CBS Sports, Home depot or CitiBank GameDay Programs.
https://marchmadness.gameday.blog

Dayton Flyers tie school record for fewest points in a half

Against VCU, Dayton shot 21 percent from the field (6 of 28) in the first half, missing all eight of its 3-point attempts. Jordy Tshimanga led the Flyers with six points. This was Dayton’s lowest scoring half since it scored 16 in the first half against Saint Louis on Feb. 24, 2016. Dayton won that […]