The Big 12 basketball tournament is set to get underway as there are just a few games remaining before the 2019 NCAA Tournament gets underway. This year’s action features the Kansas Jayhawks looking up at a few teams, as both the Texas Tech Red Raiders and Kansas State Wildcats are ahead of them in the conference standings.

Although the Jayhawks will have a tougher task to take the title than in previous years, their success in the tournament is well-documented as they’ve won two of the last three titles. Beyond that, fans have seen either Kansas or Iowa State take the Big 12 tournament championship in each of the past six years.

With the Red Raiders and Wildcats both looking like the real deal, there could be a shift in power this year, although Dedric Lawson and company will be a tough out. Lawson is just one of the multiple players to watch in this year’s tournament, as the conference boasts some impressive talent.

Along with the Jayhawks star, Iowa State’s Marial Shayock (18.7 points per game), Texas Tech’s Jarrett Culver (17.9), Kansas State’s Barry Brown (15.1) and TCU’s Desmond Bane (14.6 and Kouat Noi (14.5) are a few of the top scorers. Each player has the potential to post big stat lines, along with a number of other talented options.

We’re going to take a look at the latest Big 12 tournament bracket based on the updated Big 12 standings.

*NOTE: Here’s a link to the live and updated Big 12 Bracket.

Here is a look at the Big 12 tournament schedule based on the final standings. 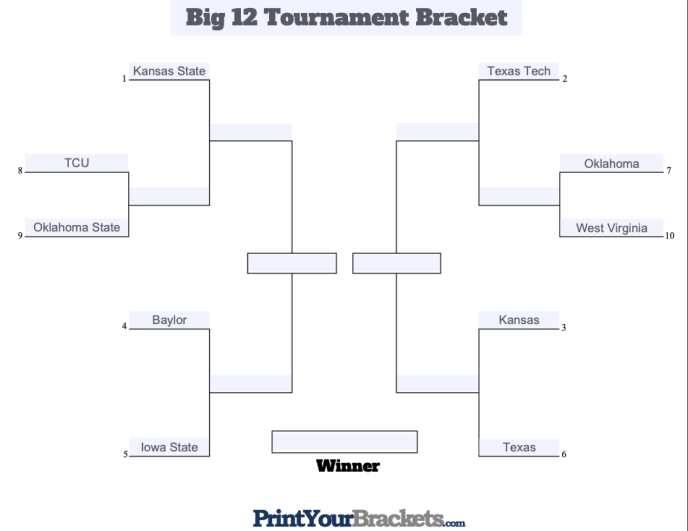 Here is a look at the Big 12 tournament schedule based on the final seedings. All TV information is courtesy of NCAA.com.

It’s worth noting that any game with ESPN/2 listed means that it could air on either of the two channels. For clarification on the schedule above, the first semifinal matchup will feature the winner of the second-round game between the No. 1 seed and winner of the 8/9 matchup facing the 4/5 winner. The other side has the winner of the No. 2 seed and the 7/10 winner advancing to meet the team that emerges from the 3/6 game.

It’s Denzel Valentine, Travis Trice and Branden Dawson’s turn to lead the way for Michigan State.Steve Dykes/Getty ImagesSimply making the NCAA tournament is never enough for Michigan State—the Spartans are all about making annual runs deep into March. With Denzel Valentine, Branden Dawson and Travis Trice at the helm, an extended dance this spring is […]

NBA Dawgs: Readying for the Restart Which of your favorite former Huskies are playing in the bubble? By maxvroom Jul 30, 2020, 10:27am PDT Source

How much should Chris Mack's Louisville Cardinals pay for problems that predated them?

Posted on May 7, 2020 Author MarchMadness Collegebasketball

Let’s suppose you bought a house — four bedrooms, three-car garage, great schools, a subdivision swimming pool, even. You negotiated a good deal, closed at the appointed time, lived there for 24 mostly pleasant months. You were aware the people from which you purchased the deed were a shady lot, and there had been allegations […]